5 Reasons To Give Linux A Try

People hate changes. Not all of them of course, but most do - that’s the human nature. However, without a change you might miss something great. That’s kinda pity that nowadays people purchase PCs preloaded with macOS or with Windows without knowing that there’s something else available.

As simple as it is, all of the Linux distributions are free. You can get a full operating system free of charge. You’ll be able to find “paid” Linux distributions, but they charge you not for the system itself, but for support they provide.

Consider this: price of PCs or laptops you purchase includes the price for OS licence. That means that if you buy hardware without Windows or macOS you save a hundred or two bucks that you can spend on better hardware or software. Profit? Profit!

Two cowboys in the saloon are drinking whiskey. One of them is local, another one is his friend from another city. Suddenly a man breaks in, starts shooting and shouting very loudly and leaves. Nobody reacts. – Billy?
– Yes, Harry?
– What was that?
– That was Slippery Joe, Harry.
– Does it mean nobody is able to catch him?
– No, Harry. That’s because nobody wants to.

Anything human built is by no means 100% unhackable, let’s be clear and agree on this.

On one hand side Linux kernel (a core of the system) has so many eyes watching it due to a nature of open source software, that chances of a security bug sitting there for a long time are fairly low. On the other hand Linux users are like Slippery Joes from the joke - they are a very small target group. This means that hackers most likely choose another cough Windows cough system to attack.

Most of the time, when you do update your system you can carefully pick and choose what you update and install on your computer. That means that nobody in the whole Universe will force you to update things that you do not want to update right now cough Office cough.

Do you know that some companies get so freaking huge amount of the information about you, that they know you better than your own mom?

I get amazed when people tell that they don’t care about privacy because they have nothing to hide. You can hear the same about security as well. Honestly, I think that’s bullshit. Neither privacy control, nor high security measures are meant to be retrospective. They are something you do to prevent, not to get rid of after this bad happened. They are protective and prospective measures you take in order to not worry when you need to be in privacy.

Nobody enjoys being surrounded with surveillance cameras, but nobody cares when the surveillance machine is just standing on their desks, that’s kind of absurd, isn’t it?

In this regards Linux goes above and beyond that, the code is constantly monitored not only for various security issues, but also to prevent this kind of things. Popular Open Source software in general is a thing that gives confidence in being respectful to your privacy.

With almost any Linux distribution you by default opt-out of any data collection (if there are any), you get full freedom to pick and choose what to install. Tools like GnuPG allow you to encrypt things in a very easy manner and exchange different things with only those people who are meant to receive them.

Do you know how much hustle it is to change the way of how your macOS or Windows look? Tired of staring at the same everyday or you want something not available in your interface?

For me personally the ability to configure whatever I want is one of the main reasons to use Linux.

Take a look at these posts from /r/unixporn: 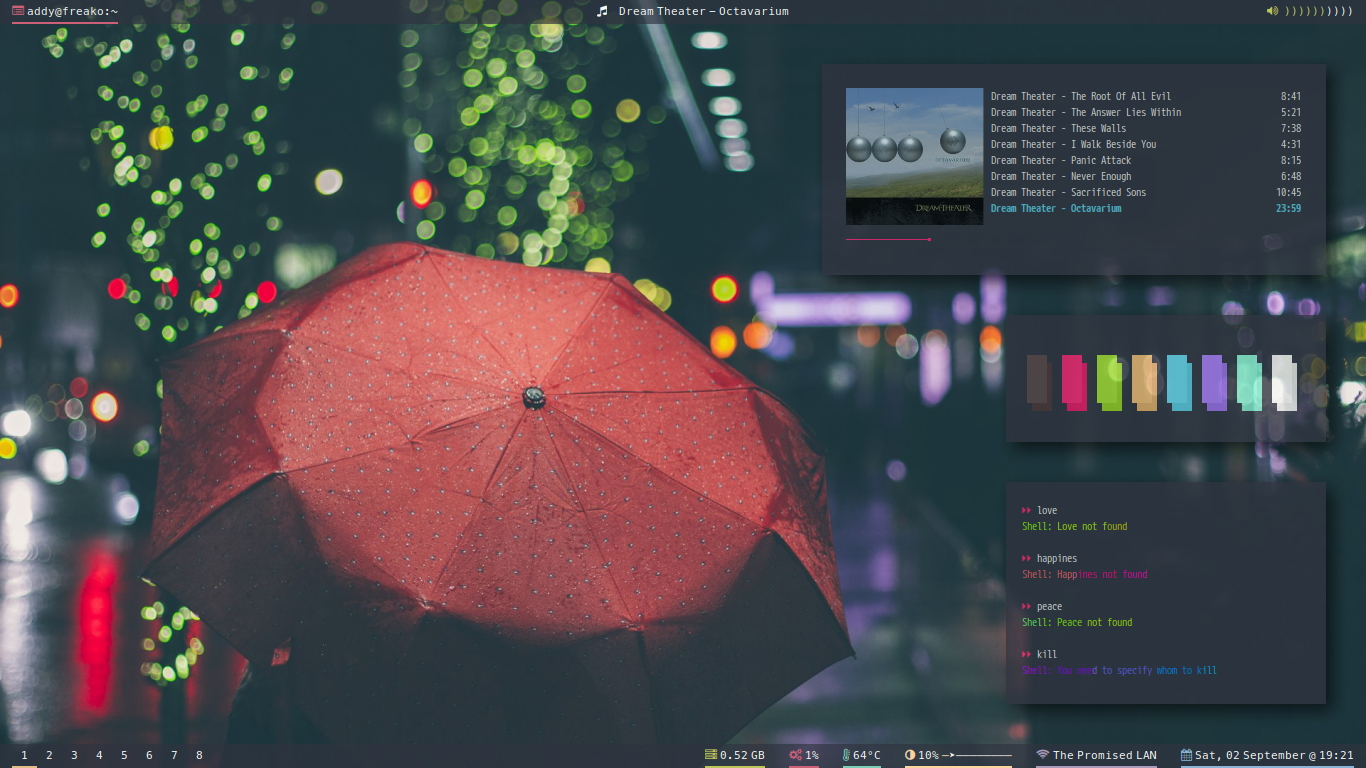 If you can do the same things in other OSes, that’s great. But what amount of effort it takes?

This reason is debatable. However, the only OS that still gets updates and can resurrect your old laptop is… Linux. Just because how the whole system works, running Linux on your old machine doesn’t require you to have the best hardware to do basic internet browsing, office work, watching movies, listening to music, even doing programming.

People almost through away laptops that are 3-4 years old just because they can not run modern software there. I got a free laptop, because previous owner couldn’t use Firefox on it anymore. I installed Xubuntu on it and that was it - a brand new, slightly outdated laptop ready to serve.

Remember a very brief era of netbooks? They all suck. The only way of making them to suck less was to install some Linux distribution. This helped to reduce resources, what resulted in far better performance overall.

With Windows and macOS you know what to expect. Each new version and update require better hardware, in the end you’re forced to buy a new PC or a new Mac.

Do you need more evidence? Read this amazing article by Bryan Lunduke: Linux powers Supercomputers. (All of them.).

Don’t know where to start?

DistroWatch is a good place to start, if you can close your eyes on their design. It’s pragmatic, but sucks very much. You can pick any distribution from the list of popular ones.

In case you’re still in doubt, you know nothing about Linux, I’d recommend giving a try to one of these:

I truly hope you found something useful in this article, if you did, please share it with your friends and colleagues.

Use Elm as a Reducer in Redux

Want to use Elm in your project, but a bit hesitant going cold turkey? In this blog post I'll try to show how you can use the best from both worlds bulletproof Elm logic and ridiculously rich React components library.

I'm starting a new open-source project "Open RSS Reader" that will be modular app so if you don't like the existing clients, you'll be able to quickly build your own. It's gonna be both open source and free to use.